If you’ve read one of our latest reviews called The Turtle moves, and looked at the pretty pictures, you’ve seen that we have more from the Discworld series. One of those is a little statuary from the Death of Rats (and other small rodents). And he’s just too cute to be!

I absolutely adore the Terry Pratchett books and his characters. He always wrote in such a way that they seem to leap of from the pages. One of the cuter characters he created is the Death of Rats. Yes, a little rat with a black robe and wielding a little scythe. This Grim Squeaker was originally just a part of Death itself but after events in one of the books (namely Reaper Man), Death decided to keep him as a separate entity.

Unlike Death, Death of Rats can’t talk human. Instead he can communicate everything in a one-syllable sound: ‘squeak’, with the occasional emphasis of an ‘eek-eek’, when he is excited. There are a few that do understand him, like Susan Sto Helit, Death himself and Quoth which tend to result in hilarious conversations to read because we don’t. Death of Rats appeared in several books, one of which has been filmed, and also had several cameos, including one in one of my all-time favourite ones.

The statue itself is made by Discworld Emporium (previously known as Clarecraft) and measures 18.5cm. It’s a lot bigger than the A’Tuin figure which results in them not displaying well together. Just like A’Tuin, this one is also hand cast in bronze resin, coated with powdered bronze, and finished locally by a team of professional craftsmen. It also has a makers’ mark inset on the base and a little scythe that can be removed. I’m unsure of what material the scythe is made of as it’s not particularly heavy.
While he isn’t very big, he does have some nice detailing. And not to mention that he’s very cute. With the £45 price tag, he is a bit expensive though. But if you love Discworld, he proves to be a perfect companion.

There isn’t much else to say about this little one. It didn’t came in an art box, but just a plain white box with some stuffing, just like A’Tuin. It’s stamped but, as far as we know, not limited per sé. That said, at the time of me writing this, he is sold out. We have no idea if (or when) he would get back in stock…

Like A’Tuin, it’s a neat little thing that’s going to be a nice little touch to our living room. A beautiful little reference to one of our favourite book series. I don’t know if I would recommend it though. It’s a cutie, but unless you’re a die-hard Discworld fan, perhaps a tad overpriced for what you get. 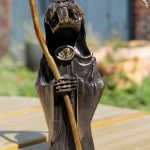 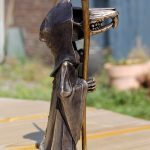 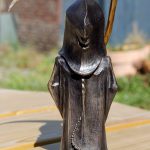 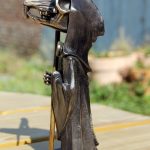 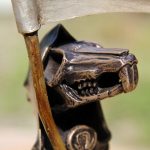 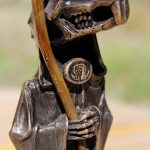 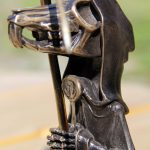 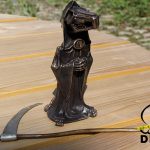 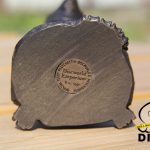 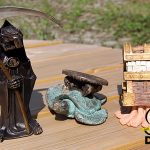 Item reviewed: The Death of Rats figure
Type: bronze resin
Manufacturer: Discworld Emporium
Variations: None
Rarity: Currently out of stock on the official website. Don’t know if they’ll make more or not