A new post written by me. And guess what, it is about Lara Croft… Again.

I don’t know if I’m repeating myself, but normally we try to only buy one, maximum two, representations of a (gaming) icon. Every collector knows that space is one of the biggest issues, so you need to deliberate a lot. This Lara is the fifth one we bought of a bigger representation: Sideshow’s Adam Hughes PF, Sideshow’s Legends PF, Sideshow’s Snowday and the first Gaming Heads 1/4th scale are all stored safe and sound on our attic.

This statue is the second Lara made by Gaming Heads and is again 1/4th scale. I’m not sure if that is entirely true. She looks a bit smaller in some pictures or angles. She is styled after the “Lara Croft: Temple of Osiris” game which is a bit of a strange choice in my opinion since those smaller games are not that well known. But the outfit is pretty close to the original, so I’m not complaining. The typical turquoise top and the cargo shorts are almost as iconic as Lara herself.

So on to the statue itself. To be honest, I like it a lot. Especially the pose. I really dig the dynamic action pose; Lara flying through the air with both her guns ready to fire at anything that moves.  The face, which is always one of the more difficult parts, is spot on.  She has a determined/stern look , the properties are okay, no cross-eyes and the paint application is very well done, so no complaining there. The paint application on the rest of the statue is also nicely done. There are no paint bleeds or misses. The only nitpicking is that maybe the shading could be done a little bit better. The details on the rest are all very well done, from the belts to the backpack, even some sand on the sole of her shoe… It all fits.

The base is quite sober. The border is edged with some hieroglyphs, the top has sand/rocks and a small part of a broken column. Sober is not a bad word here. It is in theme and doesn’t distract from the statue itself. I know of some statues that are released with big elaborate bases, but I’m really not a fan of that. I prefer plain black museum pose bases, but you can’t have it all. This one is the next best thing.

And than… the exclusive. I think I’ve mentioned before, we try to collect only the exclusives. I prefer switch out parts and really dislike lighting as an exclusive. Gaming Heads delivered. The exclusive is the Staff of Osiris itself. It comes in two parts, one to stuck in the bottom of Lara’s backpack and one in the top. This gives you the look that it is tucked between Lara and the backpack. The disadvantage of this is that it is hard to align both pieces, so it looks like a straight robust staff, and not some bend knockoff. Make sure you remember there are two pieces, I was in the middle of taking pictures when I discovered I was missing a piece. It think the exclusive here is well worth to buy the statue at Gaming Heads. They have warehouses in most continents, so you don’t need to be afraid of taxes.

So if you don’t have a Lara in your collection and you want a fine representation of this game legend this is your chance. She is still available, so don’t hesitate. The price is still not that high if you look around in the 1/4th scale shopping district. I haven’t seen that much complaints about mishaps to. A broken statue can always happen, but she was generally well received. People seem to be happy again with Gaming Heads and that is well deserved. 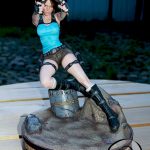 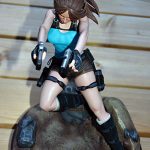 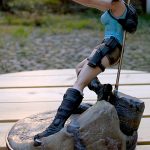 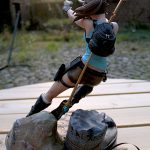 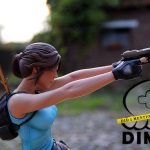 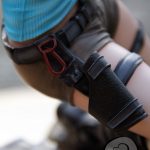 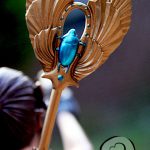 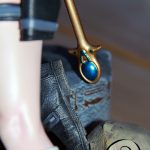 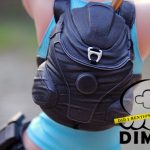 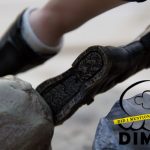 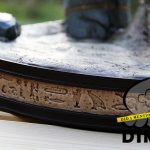