Get your nuclear powered car today!!

Like already said in previous posts, I really like Fallout. A while back we discovered ‘The wand company’ who were starting their Fallout line and gave a preview about the first in the 1:18 die cast car line: The Fusion Flea.

We received the exclusive version, the Racing Flea, a while back and were in doubt about getting the regular one. But when we were at Gamescom last week, the Bethesda store was represented. And they had the blue Flea on display… and I had one in my bag a little while later.

So on to the cars. The racing Flea is the orange/white one and is limited to 300 pieces which makes it kind of the exclusive version. This version has also some decals applied to give this one more the racing look, and they succeed in that. The regular, not numbered version, is the little blue one. This one has no decals and has the same  crystal blue paint everywhere. The blue Flea is still available and retails for 129.99 euros.

The body of the cars are die-cast which gives the little cars a nice weight. The paint job is very well done as it’s really shining like a fresh polished car. The rest of the cars is made with plastics. This isn’t a complaint as it’s normal for things like this. The chromed parts are really shiny but sometimes you can see a small mark. I think these are either from where they were hold to paint or were connected to the sprue if they use sprues. But overall the paint job on everything is outstanding. The interior is pretty basic; the seat, two dials, a steering wheel and two pedals. It is all cleanly done, but maybe a bit to sober? It is not that important, because you will never ever really look inside the car… but… let me nitpick a bit.

You can open the trunk on both and have a look at the fusion motor. When opened the purple light will burn to give you the reactor feeling.  I like this extra touch and it gives the car an extra boost in being great.

There are two things that bother me. The first one is the wheels. The Wand Company did their best to deliver a high end collectible, but at the end the skimped a bit on the wheels. They really look like standard toy car wheels. Again, this is not something you will see when you are displaying the car, but when I showed the car to other collectors, this was the thing they mentioned when I asked for negative points. The second one, is that they missed the chance to have the headlights, and maybe even the rear lights, light up. There are already batteries in there, so why not add two little LEDs?

The packaging is great. There is a really nice print on the box, giving it a retro feel. The included a cool little manual and even a pin. The pin is such a neat little extra gimmick that we both love. Both editions have a different pin and I like them both. I hope the future cars will also have one so we can display them with the cars in a lineup. The Racing Flee also comes with a numbered certificate and a small print of a news article starring the car. The blue one has an extra postcard added.

At the end, and this is really important, all the less positive things I said can not weigh up to the coolness of this product. I’m really happy to have these cars as they are now on my list of favourite things we have, game related-wise. They are really well done. I can keep on staring at them and I’ll never ever sell them. They will get a special place in the living room. This last remark itself is already telling something, because normally all collection related things are banned from the living areas.  Also, if I wouldn’t have loved the product, I wouldn’t have bought the colour variant. But seeing the two next each other is so awesome.

I can’t wait on the next one in the line, hopefully in the beginning of 2019. The only thing I’m scared for now, is that scalpers and flippers will be watching these closely now. The exclusive will be even faster sold out and resold the very next day for exorbitant prices. I also don’t like the fact that the exclusive was only available in a US store which makes it a lot harder for European fans to get ahold of one. I was lucky someone told me that ThinkGeek sold some new Fallout stuff. I checked, saw the car, saw the exclusive word, saw the edition size, searched my wallet for my credit card and ordered. And I’m glad I did. I needed to pay (a lot of) import taxes, but still the price I paid is way bellow the prices now on the secondhand/scalper market.

And we already have an update, even before the first draft is finished of this article. On the GameStop Conference of 2018 was a display shown with some Fallout stuff. The pictures are not that great, but you can find out that two other Fleas will be released; a complete green and a red/white one. Also the first glimpse of the Pick-R-Up is a fact. This one is completely red, but I assume that colour variants will come. The main question is, do I have enough Fleas, or will we really go for all the colour variants? 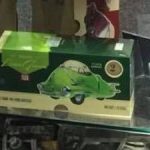 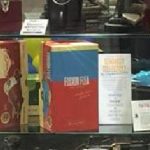 To end this review, I present to you the pictures of both of the Flea’s already in my possession. If you have any doubt, get them now you still can! I’m really curious what ‘The Wand Company’ will bring us in the future. This company has recently popped up on my collector radar and will be followed closely from now on! They are also releasing a Build Your Own Pip-Boy. I have seen this in person now and it looks good. Unfortunately, only German people could pre-order it. I was afraid it would be too plastic, but this was luckily not the case. This is a good time to be a Fallout collector! 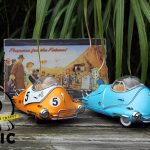 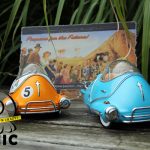 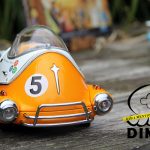 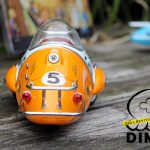 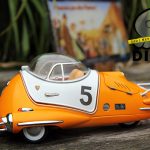 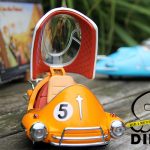 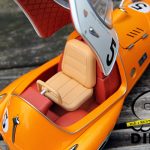 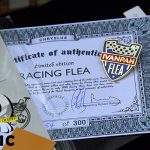 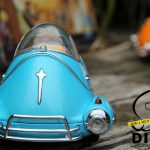 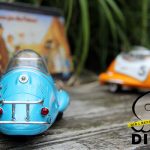 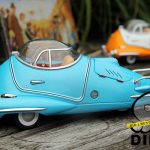 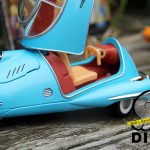 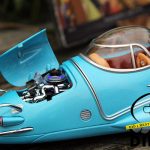 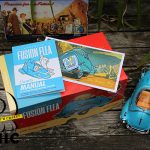 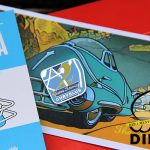 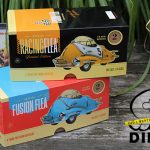 Item reviewed: Racing Flea (limited, store exclusive) and Fusion Flea (unlimited)
Type: Die-cast, plastic
Manufacturer: The Wand Company
Variations: two more colour variations coming, not much known about those at this point
Rarity: The Racing Flea is long sold out and expensive. The Fusion Flea is still available for pre-order in most stores as most don’t even have it yet.