If you’ve ever seen our review on the Dean Yeagle Mandy statue made by Anders Ehrenborg, you know that they are the best out there. And what’s ever better, he’s back with another rendition of our favourite blondie!

When Anders released his first statue of the pin-up icon, we of course asked if he had plans for another. For a while, it seemed that they were going to do a very similar variant of the first release but with Skoots this time. While I loved them, I’m also glad that they scrapped the idea because it’s too similar to the originals: 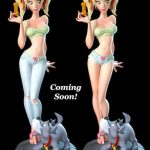 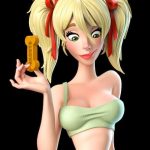 Quite a few months passed after this initial tease which I didn’t posted about as they told us pretty quickly that it wouldn’t happen anyway. But suddenly, Anders got back to us to tell us that they’re working on a new version! And she’s lovely!

It is odd however that the image we found on Dean’s Facebook page has a different coloured panty then the 360 we got from Anders. We don’t know which colour will be in the final version. Personally, I kind of preferred if she didn’t wore any. I mean, she goes commando in most of Dean’s illustrations.

That said, we unfortunately have very sparse  information to share with you. There is going to be a limited edition again but no word on what that is going to be. Also, no release date or price point have been set but Spring/Summer 2019 should be doable according to Anders. On price, he’s trying to keep them the same as the previous release but as it’s been a while, with all prices going up, we expect them to be a bit higher now. To recap, the first editions were 185 USD (regular) and 300 USD (exclusive).

I do hope that she’s going to be in the same scale as the originals, but to be honest, I’m not expecting them not to be. Well, I know that we are definitely at least going for one version as we know that Anders delivers both on sculpt and quality. And if we can’t chose again which one, we’ll end up with both yet again. I won’t mind… Bring it on Anders!