You are formally invited… to the creation of my new galaxy!

One of our first gashapon sets was one of Nintendo’s greatest game innovations of the past years; Super Mario Galaxy.

Made by Yujin, these mini figures are almost as awesome as the game itself. Almost. I wouldn’t be me if I don’t have anything to say about anything.

First of, this set consists of only 5 figures, being; Mario with a yellow Luma, Princess Peach, Rosalina, Bowser and a pair of Octoombas. While I’m happy that Rosalina finally got a decent figure, or actually any at all, I’m still sad that they didn’t make more characters. And especially more enemies. We’re in dire need of more baddies from the Mario/Nintendo galaxy! 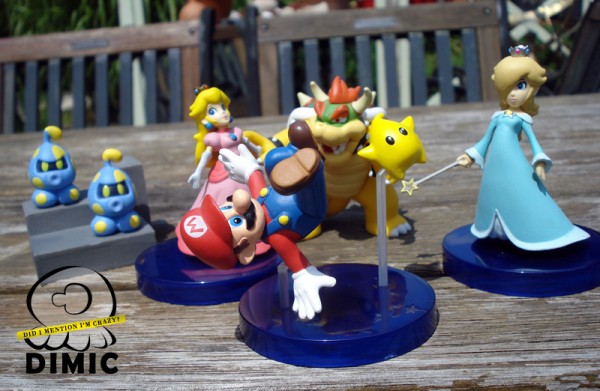 Even though the game doesn’t really need any introduction, because most will have played it (and if you didn’t; SHAME on YOU), I’ll tell you a bit about the story behind Super Mario Galaxy.

When Mario is invited to the Star Festival by Peach, she get’s abducted yet again by Bowser. But this time, he also takes her entire castle and Mario is thrown into outer space. Of course, this is yet another (doomed) plot of Bowser to create an empire at the center of the universe, with Peach at his side. When recovering in the Gateway Galaxy, Mario is asked by Rosalina to rescue the Power Stars in order to save Peach. He’s also been given the Baby Luma, who allows him to star-spin and travels with him to all locations.

Isn’t that nice. I’ve always wondered when Bowser realizes that Peach doesn’t love him and that he needs to move on… A girl can only take that much.

Anyhow, let’s get to the figures.

Like always, Mario has been included in this set. Can’t have anything Mario related without this character can we? Ah well, at least he’s very nicely made and also has a Luma by his side. Which is, for me, a huge plus. What I also like is that you can actually position Mario a bit. It’s not much, not like a real action figure or something like it, but it does expand his display options which really isn’t a bad thing at all.

And while they usually always include a Peach in every set whether being mini figures or pluches, she’s almost always extremely ugly. Which is a darn shame since she’s such a big character in the franchise. But luckily, the Peach in this set finally does it right. She’s quite nice and finally her face doesn’t look like it walked into a wall. Repeatedly.
I do think the pose is a bit dumb but since she’s quite nice, I don’t really complain a lot about it. Her holding a Luma would have been a better indication that she’s from the Super Mario Galaxy game and that’s she part of this set. Ah well.

Next up is Rosalina, a new character made especially for this game. Rosalina is, without doubt the best figure in this set. I love her hair, the dress and her wand even is transparent in the middle of the star. She’s really nice and the pose isn’t awkward albeit a bit boring. But only slightly luckily. It’s such a shame that this is the only figure of this character because she’s wonderful.

And that’s it about the ‘good guys’ from the game, so it’s time for the baddies. I’ve always have had a soft spot for the baddies in games. I generally like them better then the heroes and they usually also have a much cooler design. This also goes for the bad guys from the Mario franchise. First, we have the, almost always present, head bad guy; Bowser. While I always have loved him (he’s just misunderstood) he, like Mario, has always been included in any sets featuring Nintendo characters. But, I have to say, he’s nicely made but regarding Bowser, they rarely screw him up.

And while I love Bowser, I love the fact that they put some uncommon enemy into this set even more. Instead of the usual Goomba or Koopa, they included a pair of Octoomba’s. Octoomba, or Electrogoombas/Octogoombas, are very common aliens in most galaxies, and bear resemblances to Goombas and Octopus, both of which contribute to the name. While these might be common in this game, they’re not common at all in the world of merchandising. Which is a darn shame because they’re so cute!

While I do love these two, I really don’t like the fact that these don’t have the blue disc as base. I don’t like a breach in uniformity… And I also don’t see why they didn’t include it. Okay, they might be good enough to be able to stand on their own but still. Ah well. Can’t have it all right?

Conclusion
The only gripes I have with this set are the fact that there are only five of them, they don’t all have the same base and that these are prone to dust. Because of the materials used, these get a little bit oily after some time and thus the attracted dust is harder to remove. But, on the other hand, these are quite nice for such small figures and I just love Rosalina. She’s definitely the best of the set. This set also has one of the best Peach figures I have seen so far. As you can also see, there are a few paint misses but those are hardly noticeable. Also, don’t forget that these are only about 10cm (~4inch) tall.
All in all, this is a wonderful little set. If you can still find these, don’t hesitate to buy them. They’re among the nicest merchandise pieces for this amazing game.

Item reviewed: Super Mario Galaxy Gashapons
Type: gashapon, mini-figures
Manufacturer: Yujin
Variations: none
Rarity: Getting harder to find due to the fact that they’re getting pretty old (2008). Watch out for fakes!