It doesn’t happen often that I don’t see things coming but today has been an off-day for me. First, I didn’t expect that it would snow this much today. So much in fact that I’ve been having a rather boring day inside. Can’t go to school and thus making all my assignments at home. And secondly, what I really didn’t expect, at all, is that Gaming Heads would announce something today. And not just any announcement, no it’s a new pre-order! And on top of that, it’s also a brand new license! Here’s the first statue in their The Elder Scrolls V: Skyrim line; Dragonborn.

At least, I think it’s a line. Don’t know for sure since it’s isn’t explicitly mentioned anywhere… Ah, well. 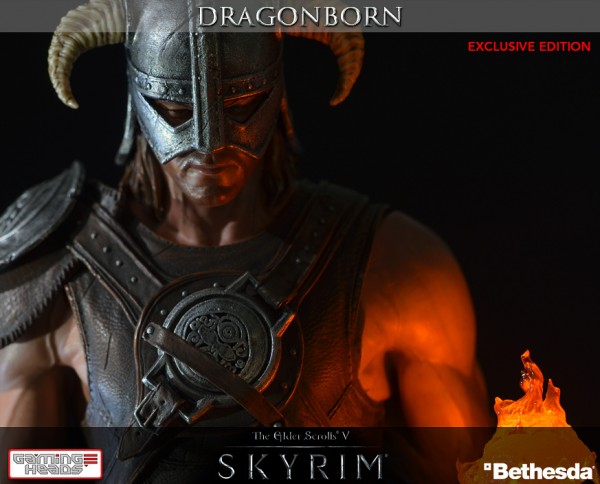 My first reaction when I saw this was something like; ‘Aaaiiiaaaarrhhgggghhhiii’. Yeah, nothing intellectual that’s for sure. My second reaction was asking Ingis for our creditcard number and ordering this statue right away. Without looking at the price or any other detail. Yes, that’s how much I like this one.

For those that are not familiar with Skyrim, the latest installment of The Elder Scrolls, here’s a quick intro from our good friend Wikipedia:

Skyrim’s main story revolves around the player character’s efforts to defeat Alduin, a Dragon who is prophesied to destroy the world. Set two hundred years after Oblivion, the game takes place in the fictional province of Skyrim, upon the continent of Tamriel, and the planet of Nirn. The open world gameplay of The Elder Scrolls series returns in Skyrim; the player can explore the land at will and ignore or postpone the main quest indefinitely.
The player character is the latest “Dovahkiin“, a Dragonborn, an individual with the body of a mortal and the soul of a Dragon. Dovahkiin are anointed by the Gods to help fend off the threat Alduin and other dragons pose to Skyrim and Tamriel.

Saw that strange word earlier? That Dovahkiin? Well, that’s another word for Dragonborn, which is also the name of this statue. Interesting huh.

This Dragonborn, a statue that has been inspired by official artwork, is standing powerfully upon his rock base, surrounded by the tail of a mighty dragon. Which is really neat. I like dragons. That’s also how I met Ingis. But anyway, this statue is in 1/6 scale which means it’s about 16 inches tall (~41cm), including the base. It’s made of resin but, and here comes the most awesome part, it’s also mixed media! Yes, it does indeed include authentic, hand-tailored fabrics and it looks really, really awesome.

Like usual, there will be a regular and an exclusive edition of this. The exclusive comes with an alternate arm that holds a fireball spell which actually lights up and pulses like real fire! So cool! You can also exchange the hand for one holding a short sword (which is the regular version).
Apparently, there’s also an alternate portrait without helmet but the strange thing is, is that it’s nowhere to be found on the pictures… Weird huh. It does appear, however, that it’s also an exclusive only option. So, I don’t think many will hesitate about which version to get…
Oh, and did I mention that the regular is limited to 1.000 pieces worldwide and the exclusive only has 500 pieces?

It’s been a long time that I’ve been this impressed with a statue but here it is.