I’ll be fine. In fact I’ll be anyone.

Last year on F.A.C.T.S. we were finally able to buy the Sideshow Collectibles Mystique premium format for a decent price. And, to keep our tradition, it was luckily also an exclusive version!

Being sick isn’t much fun, especially when you can’t do anything behind a computer because you need to rest. Luckily, I’m feeling a bit better and what better way to celebrate then with a review of a statue we’ve been wanting for years?

Back in the beginning, somewhere in 2010, we started looking at Sideshow products. Problem was, we were looking at non-game related products and in that time, we didn’t buy anything non-game related. Have to draw the line somewhere right? Yeah… that quickly changed when we caved and bought Darth Talon and ordered She-Hulk, Black Panther, Black Cat and Ms Marvel. Indeed, when we stray, we stray goooood.

But there was one other we really wanted but that one was released even earlier then the Darth Talon we hunted down. Back in 2008 on the 19th of June, Sideshow Collectibles released the pre-order for Mystique. So even then, she was already released for about 1.5 years. Luckily, for some reason, she isn’t that popular and thus not that hard to find. But every time one popped up on Ebay or one of the forums, it was a bad time for us financially. Or they didn’t use their own pictures. Or they were asking just way too much. So, when we found one on the yearly event we go to, I was happy. Especially since I don’t like taking risks on shipping and dealing with second hand statues.

Mystique has to have one of the coolest powers in the Marvel universe. She can transform into anyone which really comes in handy when being a villain. Here’s a quote from Wiki:

Mystique (Raven Darkhölme) is a fictional character associated with the Marvel Comics’ franchise X-Men. Originally created by artist David Cockrum and writer Chris Claremont, she first appeared in Ms. Marvel #16.
Throughout most of her history, Mystique has been a super-villain, founding her own Brotherhood of Mutants and assassinating several important people involved in mutant affairs. Mystique herself is a mutant, a shapeshifter whose natural appearance includes blue skin and yellow eyes. At one point, she mentions that she is over 100 years old. Mystique is the mother of the villain Graydon Creed, the X-Men hero Nightcrawler, and adoptive mother of the heroine Rogue. She is forced to abandon Nightcrawler, but raises Rogue for a number of years, and the two women have mixed feelings towards one another.
Despite Mystique’s history of crime, she works with the X-Men’s Professor X in a short-lived series. She is later voted straight into the X-Men.

Now, on to the statue!
First off, as you can clearly see, this is one sexy statue. The pose is seductive and dangerous at the same time, which works quite well.
There were a lot of comments on the chosen outfit when she first went online. A lot of people wanted her in her iconic white dress but I get why Sideshow Collectibles didn’t made her in that. They already released a comiquette (1/5th scale, fully sculpted) of her in that dress. While I do love the dress, I’m also quite happy with this outfit. It’s well made and fits her like a glove. Only minor complaint I have is the length of the pants. It should have been slightly longer so that it would cover the boots a bit more. But, like I said, it’s a minor complaint.
Another complaint they had is that she has pupils while others complained that the difference between the yellow of the pupils and the yellowed white of the eyes isn’t noticeable. Personally? I don’t get their problems. I love the eyes and like the fact that you can actually see that she’s looking at something.
The exclusive part of her is the belt. It’s not removable, but I don’t care since I highly prefer it that way. It really gives her just that little bit extra, don’t you think? You can slightly position it to the way you want but only slightly.

As far as paint application and sculpting goes, this is one great statue. Her body isn’t just dipped in blue paint but has subtle shadows and highlights which makes her pleasant to look at even in bright light. The hair could have been done better in terms of sculpting but you have to remember that this is an older statue and they’ve come far in terms of sculpting things like that. It certainly isn’t bad and it’s well painted but it’s the one thing on which you can see that this is an older statue. I do love the skull that is just visible on her head. It’s clean and crisp.

The base is a simple black and white checkered floor but, while simple, it does help to let the blue of her body and the shiny black of her clothes pop out more.

As far as problems go with her, I haven’t found any. Could be that in those glory days, there just were less issues with their statues…

I like her. I really, really, like her. And you will too, believe me. She’s just so sexy and well-made. The exclusive isn’t much, but like with Talon’s cape, it does give her a bit extra flair. I’m just so happy to finally have her in our collection! 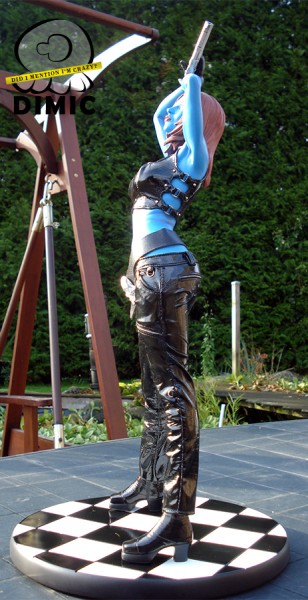 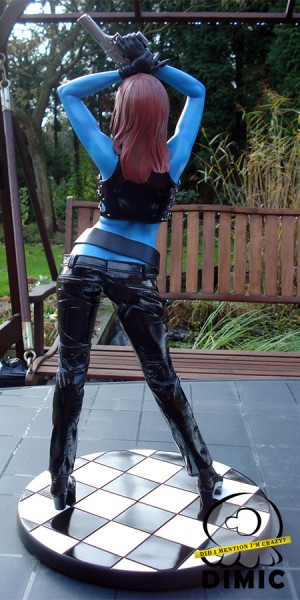 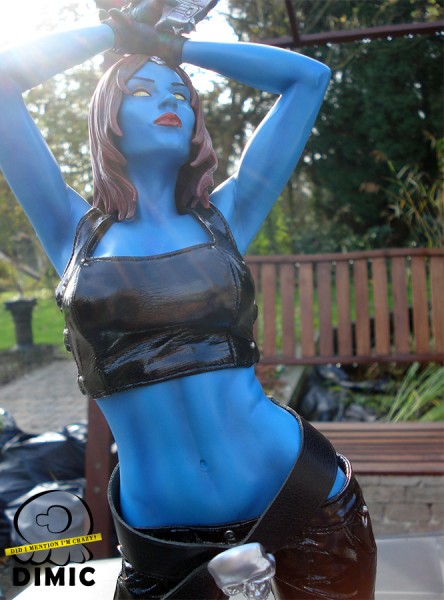 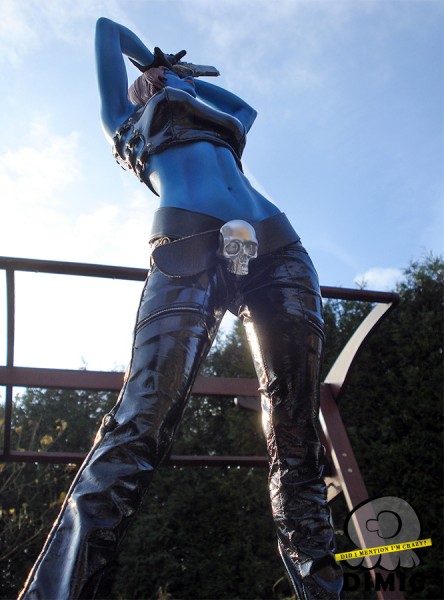 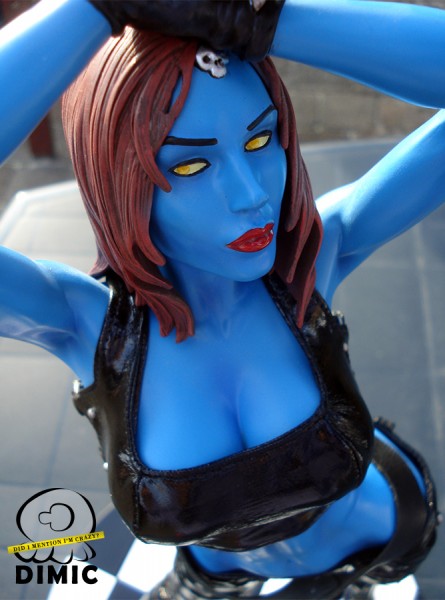 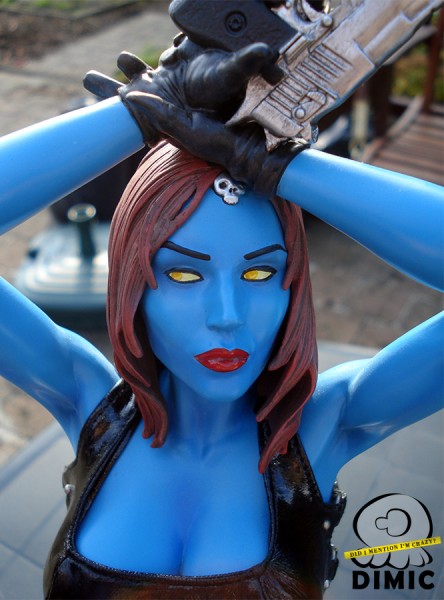 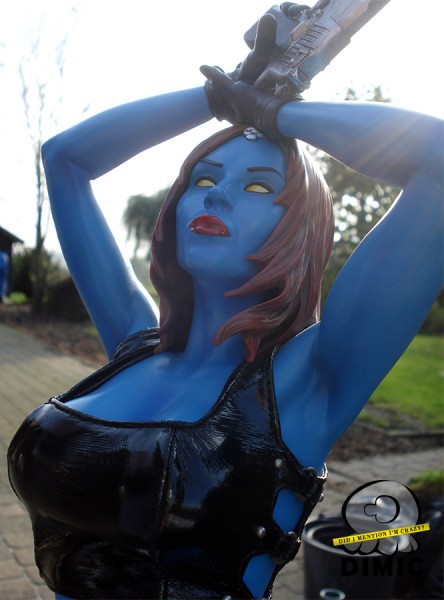 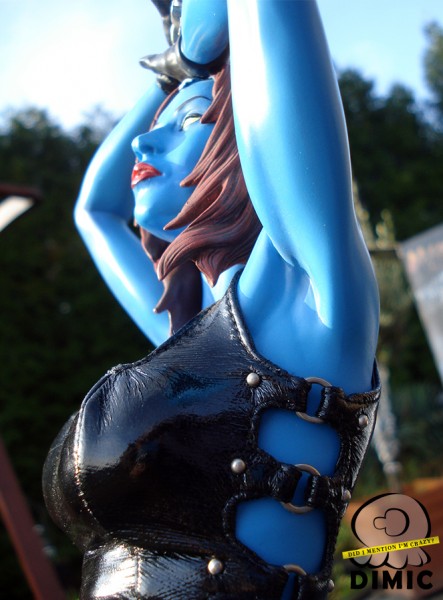 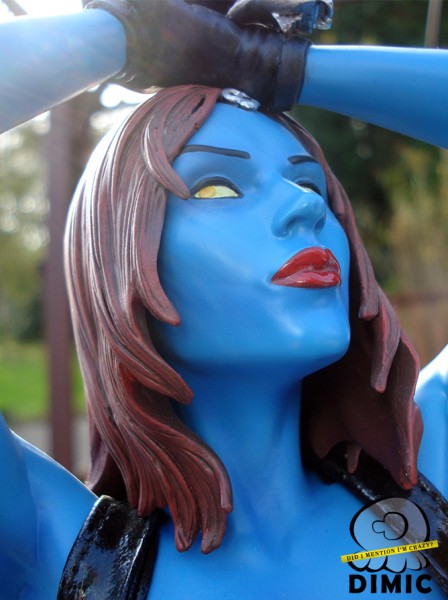 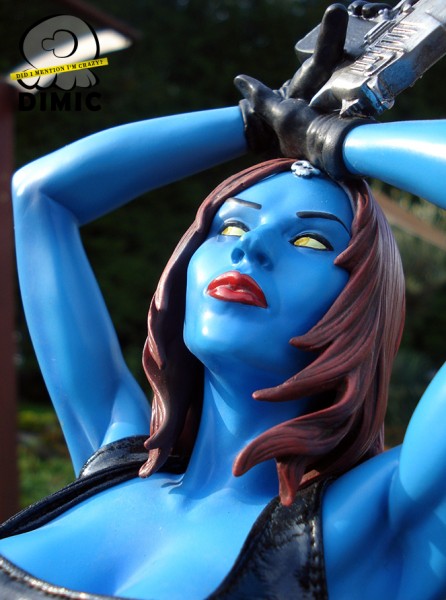 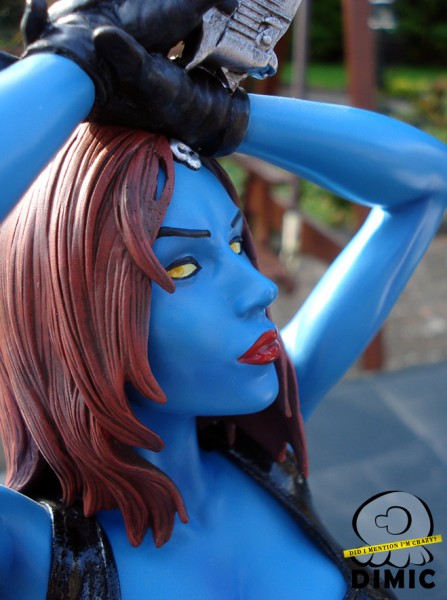 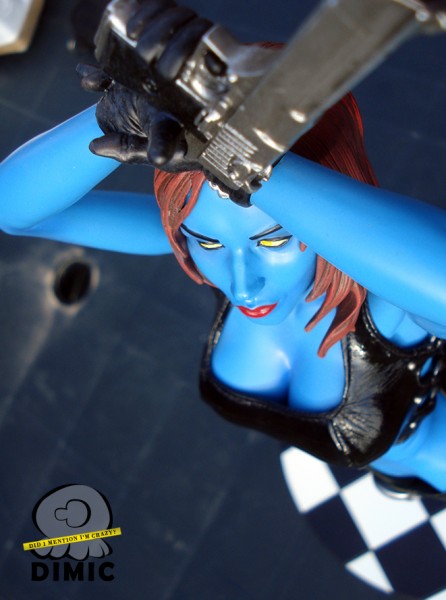 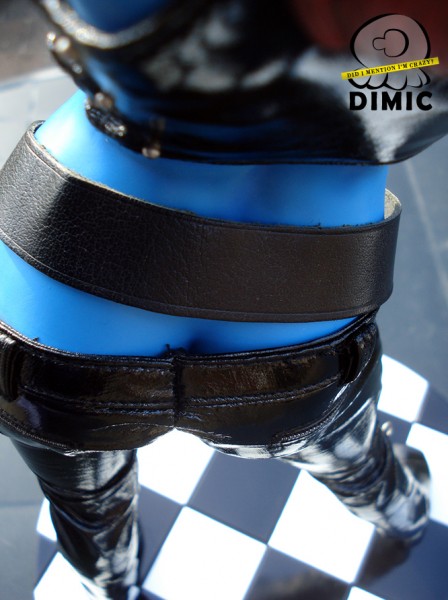 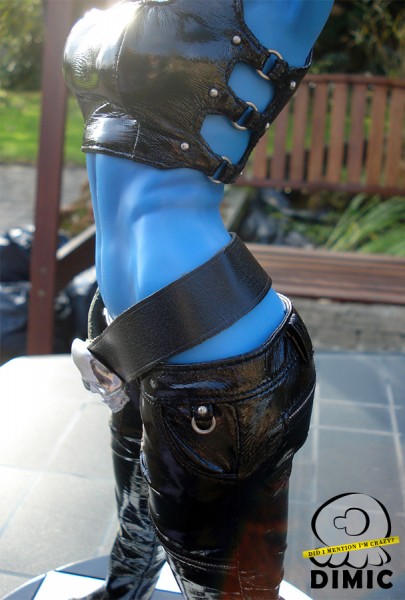 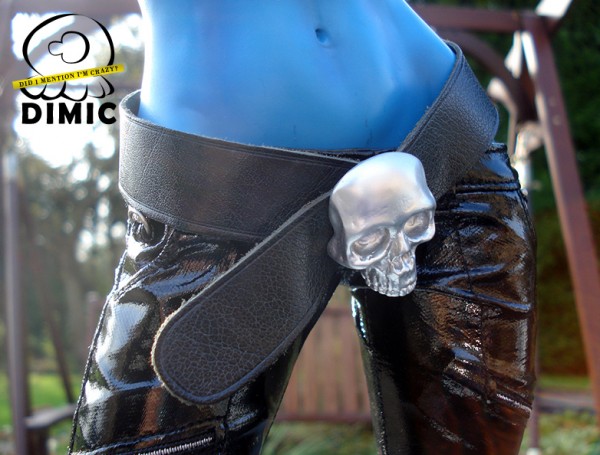 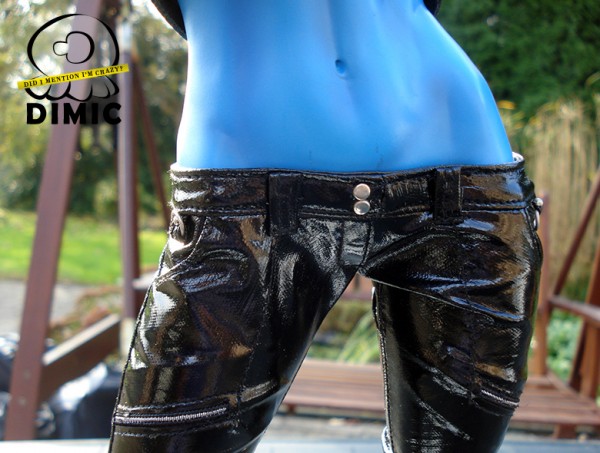 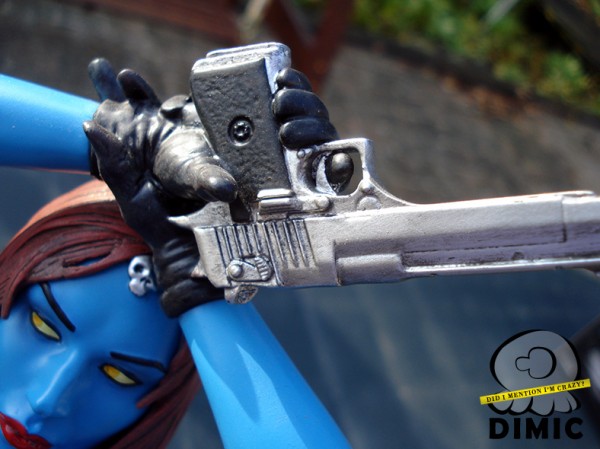 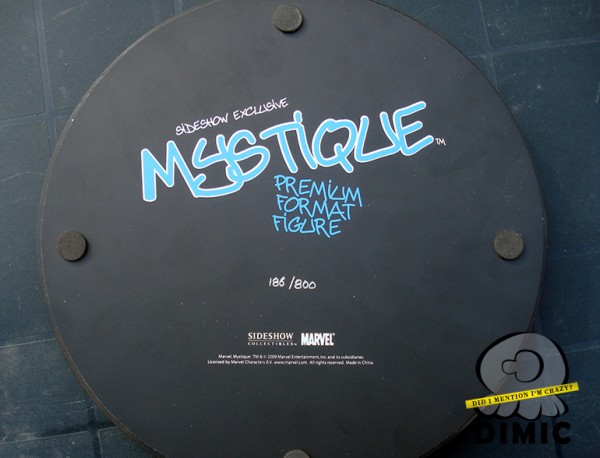 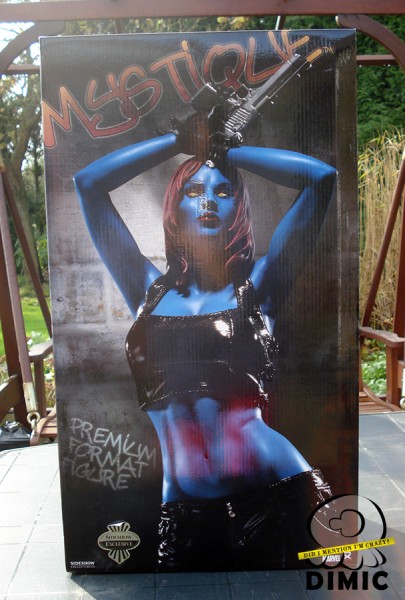 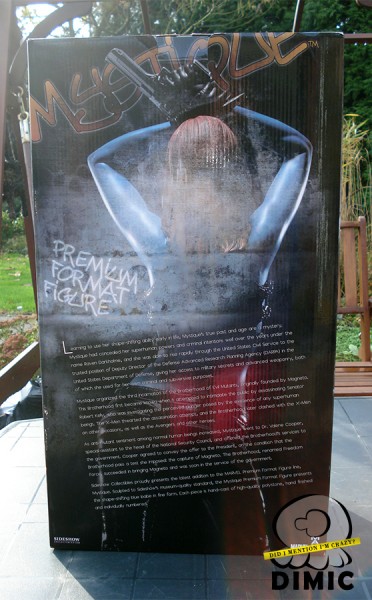 Item reviewed: Mystique
Type: mixed media (resin with cloth)
Manufacturer: Sideshow Collectibles
Variations: regular edition (without the belt)
Rarity: Both versions have been sold out for quite a while since it’s released back in 2008 (19th of June). Can be found on Ebay sometimes though. 800 (ex) and 1250 (reg) made worldwide