Two times a year there is the Tokyo Wonder Festival, at this moment the winter edition is almost at an end. At the same time in another continent, the NYC Toy Fair in full swing. Both fairs are announcing some pretty nice game related merchandise. We here at DIMIC are so friendly to share the news with our beloved readers. Yeah, I mean you…

First Stop is NECA. We aren’t really big fans of this manufacture, cause most of their products are action figures (and kind of crappy). Despite that, they convinced us already with one series; their Bioshock  2 line. But still, we’re not running that warm for most of their stuff.  But since the Bioshock line impressed me, they deserve a second chance. Especially after seeing their new announcements.

First of all, they announced a pretty big cooperation with Valve and they’re already planning several Portal 2 merchandise including a 1:1 scale Portal Gun! Just admit it, that’s something everyone wants to have. At least I know we do. This item will be priced around the 130$, which isn’t that steep and there will be a functioning two color led light included. The problem is, we’re probably expecting to much from this… What I’m really hoping for is that this will not be made of easy discoloring and/or breaking plastic.
They also announced two versions of the companion cube, a resin and a plush one. Please be advised if you buy both to keep them apart. You don’t want to throw the wrong one to your girlfriend.

There is also a bunch of Team fortress stuff on the menu. There are already 3 cuddly one’s (the scout, the soldier and the pyro) and some action figures. To conclude the Valve licence there is also coming a statue of Gorden Freeman, a Headcrab plush and some Left 4 Dead action figures.

The second licence NECA snagged is the Bioshock: Infinite licence. Yes, they are continuing their Bioshock exploits. And that’s while we’re still waiting on the release of their last announced Splicer pack! NECA is also releasing a very nice 1:1 replica from Infinite; the Sky-Hook. This one looks again amazing on pictures, but the same thing we’re afraid of with the Portal Gun is applied on this one…
They also showed a Columbia Souvenir Statue that actually looks pretty neat and will ordered for sure.

As last interesting thing  from NECA is their Resident Evil statue. It is from Resident Evil: Operation Raccoon City and is one of the 6 main characters, Vector. Vector is the team’s recon expert and is equipped with a cloaking ability. Now we’re also wondering if they’ll release all the main characters like this…

Next up is Square Enix. They’re coming with a new licence in their Play Arts line, namely Mass Effect 3. Wanna know something really strange about the Mass Effect licences? There are already three big players on the merchandise market with this licence but we’ve yet to see anything serious done with it. And no, we are not willing to talk about DC Direct their stuff. Square Enix showed three unpainted sculpts depicting Garreth, Shepard and Ashly. The first looks are pretty promising, the details are looking good. But Square has never impressed us with their Play Arts apart from their Kingdom Hearts King Mickey’s, so we’ll see…

A surprising announcement is coming from Art Spirits. Who, we hear you ask. Well to be honest, I have absolutely no idea. They are a brand new player on the merchandise market, only released one figure so far, so we don’t really know if they can deliver quality. Time will tell, but we are always willing to give a new company a shot. Especially when they announce something that looks this good!
Art Spirits announced two statues from the game Catherine, namely Catherine and Katherine. The sculpts are looking very good and we can’t wait to see them painted and we’re most likely pre-ordering them.

Also Kotobukiya is being a busy bee. They’re expanding their Bishoujo line even more and more. I already posted some of the Tekken ones in a former post, but there is more. They announced the second Mass Effect Bishoujo, Female Shepard. This is a bit a strange choice, but we are curious to see the art work of this one.
They also confessed that Cammy or Chun-Li aren’t going to be the first Street Fighter Bishoujo’s! But, and I’m quoting, “it’s way too early to disclose any hints“.

As we said in our Max Factory preview of the Samus figure and figma, they’re now expanding their figma line into the world of games! The next one that gets the figma treatment is Link from the Legend of Zelda: Skyward Sword. Personally, I don’t like him. I think figma’s only look nice when the character is wearing armor so that the joints won’t get noticed that much. But hey, each his own I guess…

And last, but certainly not least, is Megahouse who’re coming with several Persona 4 figures. One of the previewed ones is from the Animated series but the other two are from the games! And even though the pictures are a bit blurry, so far, they’re looking good!

Let’s gawk at some pictures! 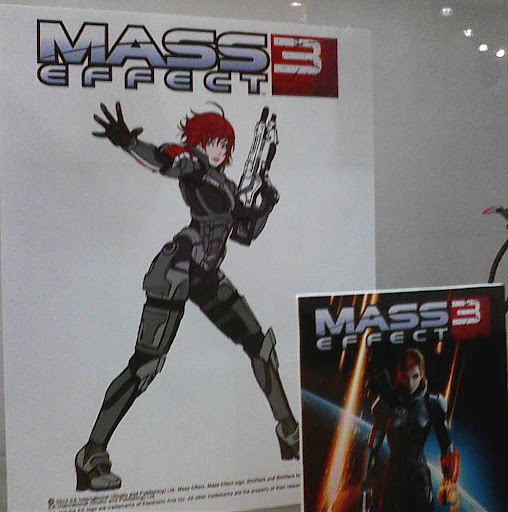 Pictures are owned by their creators. Since these came from the internet and are quite spread, I do not know the exact owners of some. On some, there are the watermarks of the owners. If one (or more) of these is (are) yours and you don’t want them up here, just let us know 😉