Megaman is back for more!

Bandai Japan was also on SDCC (San Diego Comic Con) and finally, they showed some more Megaman D-Arts stuff! And even though I found some sneaks a fair while ago, I’m still pretty excited for these figures!

I generally don’t like action figures but for some, I’m willing to make an exception. These D-Arts, albeit small, are just so awesome. Ingis already reviewed one of them here on DIMIC, namely last years SDCC special: a chromed color version of the first Megaman X they released. Currently we already have three and there are three on their way as well. These will make for an awesome display! Especially when you got multiple like us and some display stands (that we still need to find somewhere) so you can create all sorts of battles. Of course, no battle is complete without a boss or a boss inside a tank like object! 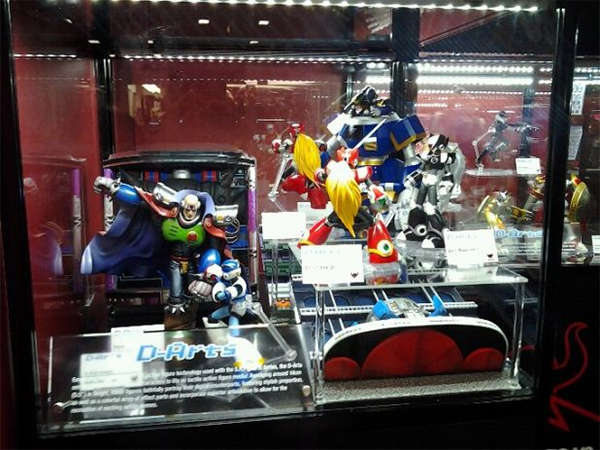 But don’t get excited just yet… Sadly, only the Zero (Black Version) is scheduled for release. Oh, oh wait, I got a side note for that figure. Even though Bandai is promoting him as Zero (Black Ver.), I don’t think that it’s the Black Version at all… I even made a comparison picture from the game sprites to show you:

As you can see, both the jewel and the hair have the wrong color! The jewel is supposed to be blue and not red and the hair should be brownish and not grey. So, according to the sprites, this won’t be the Black Suit Zero, but the Fake Zero! Which is a huge difference! I wonder what Bandai has to say for that…

Vile (the purple dude) is already released as are Megaman and the other Zero’s in the display booth, besides the Zero Black Ver. of course. So what about the other two? Those are Sigma and the Ride Armor, in which Vile is having so much fun. Both of these items are still prototypes and Bandai is working on licensing for these. So they’ll probably want to release them but for now, they want fan responses on these two items. So help us and all Megaman fans that collect these D-Arts by responding either here, on Bandai’s facebook or by spreading the word!

Now, enough of the chattering, let’s get a look at the pictures!