How does it feel to be beaten by a little girl like me?

We like Cammy, we both do. We like her in the games, comics and merchandise. Before we got our hands on the Pop Culture Shock one, we bought this one on F.A.C.T.S ’09 and she’s a beaut!

I always liked Cammy, but usually not the representations of her. At that time, I even didn’t like the PF/mixed media one (which is MUCH nicer in person though). But when Ingis brought this home with him when he came back from F.A.C.T.S. 2009 (I was sick at home), I just fell in love with it.

We were lucky with this one since he bought her for about 30 euro (~39USD) but I would even have paid the retail price she used to go for (~70 euro). If that isn’t an indication that I like this one, I don’t know anymore. It’s a shame that she getting so hard to find. I liked this one so much I even bought the white and black versions from a local fellow collector. But that didn’t end well… The figures were definitively bootlegs (wrong packaging, discoloration, crappy material, …) and the seller even didn’t refunded all our money because ‘it doesn’t matter because we paid a nice price for them’. Eh, WHAT?!
Anyhow, that was two years and a bit ago.

She comes in four different colors that look awesome when displayed together. There is the black version with a slightly lighter skintone or the white with a slightly darkter skin. And you also got a blue version with the same skintone as this pink one. Those four make some really fancy pairs to display. I’d love to get the other three someday…

As you can see on the pictures, the paint application is very nicely done. Not many mistakes or things like that. But what I really like about this figure is the sculpt. She’s ready for anything you throw at here. Beautifully deadly.
Only thing I don’t like are the ponytails. The color is slightly off with the rest of her hair so it looks a bit weird. But since you won’t display her with her back at you (unless you really, really like those cheeks), you won’t notice it.

Another thing I really dislike about this figure is the amount of bootlegs that you find of her (well actually only of the black and white). Ebay is swamped with them. The only legit looking are those from Japan but I don’t think I’d be ever willing to spend over 150 euro for one of them even though I love them. Perhaps if I’d win the lotto or something… Neh, probably not even then.

This is one of the nicest Cammy PVC figures ever made! I’m just in love with this one. The colors are good, as is the paint, but the nicest is the sculpt. It’s truly one of the prettiest out there. But beware of the bootlegs! There are many, many out here… So far I haven’t found one of this pink version, but just in case; beware. 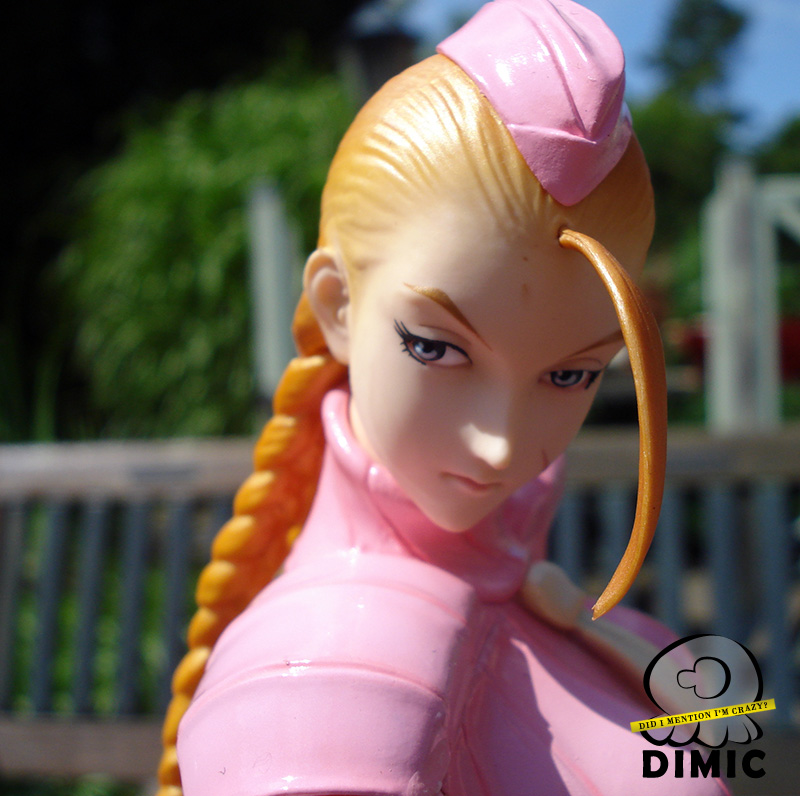 Item reviewed: Street Fighter Zero 3: Cammy
Type: PVC
Manufacturer: Kaiyodo
Variations: light blue, white and black versions
Rarity: Pink is the most easiest to find, but the figures are quite rare and expensive overall. Watch out if you want to buy the black or white version since there are certainly bootlegs made of those!