San Diego Comic Con (or SDCC for short) and the previewing days has never surprised me as much as this year. And strangely, the most interesting statues of them all are from a company we normally don’t follow; Gentle Giant.

Beware: lots and lots of pictures! 78 in total to be precise. I even installed a new plugin just for this post 😀

Gentle Giant is mostly known for their busts lines like those from Harry Potter, Marvel and Star Wars, but they do make statues. Their absolute best are those of Sucker Punch. Those were the prime example that final released statues can be as good as the prototype. They almost made us collect movie based statues as well but, simply because we saw them a tad too late (Baby Doll was already sold out everywhere), we didn’t.

Luckily, their new line isn’t movie-based at all! In fact, it’s a own IP (= Intellectual Property) kinda line.

We don’t know when they were sneaked since these came as a complete surprise to us and I can’t find any information prior to the SDCC show… Might mean that they were able to keep a secret which is a considerable impressive feat nowadays… Anyhow, their new line is called Honey Trap (or Honey Trap Army) and for obvious reasons. They are extremely sexy and, presumably, very lethal as well and it isn’t hard to imagine that a lot of guys will swarm around them. And girls as well if there are more like me. Which probably are. Have to be…
Anyhow, these aren’t based on a specific movie or game or something but have influences from different classic movies. Because they’re not based on other peoples stuff, GG didn’t have to acquire any licences and what’s even better, they don’t have to bend to other peoples wishes like so many other companies *cough*Sideshow*cough*PopCultureShock*cough*. Especially the last is a big plus for me because that means that what you see is what you get. And if it isn’t, you know for sure who to blame. But looking at their superb Sucker Punch statues, I don’t think we have to worry about anything.

So far, they previewed five different designs! Five! Yes, five! But according to Gregory Crafts (who is GG’s Marketing Coordinator) who gave a little tour around GG’s booth on SDCC in the movie I watched (see below), they’re planning on a unlimited run of these babes. The number of statues I mean, not the edition sizes. Which is very interesting indeed. Now, let me introduce the five babes to you, or use the links to jump to the ones you prefer: Fire Ball, Kat-Ya, Derby, Whisper or Lucky. 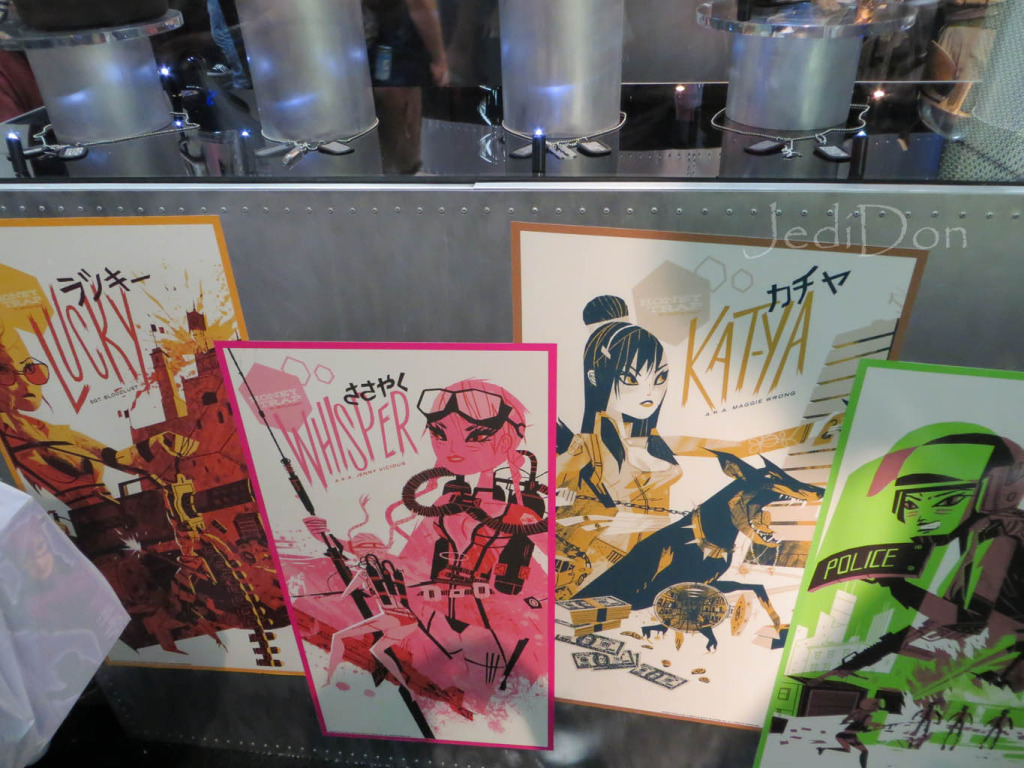 The first one in the display case is Fire Ball. Fire Ball is a wink and a nod to LeMans (not Bullit as was said in the video) and has a cross as charm with her tags. The things I really like about this statue are the tutu and the belly button. Oh, and don’t forget about the lovely details like the zipper in her boots or the emblem on her jacket. Also she’s kind of dirty (literally) and I personally feel that that doesn’t happen often with ‘sexy’ statues.

Ingis find this one the least of the five. But for me she ranks second least. Not that I don’t like her, or the least of them. On the contrary, I only ‘ranked’ them simply because I have to pick a favorite. In all, I love them all for different reasons.

The one next to Fire Ball is my personally least-favorite. Kat-Ya’s a tribute to The Good, The Bad and The Ugly which I personally only see in the spurs. Of course, the last time I’ve seen this movie was when I was just a little girl… Don’t remember much of it. Yeah, I know, I need to re-watch it someday soon.

The reason why this one is my least favorite is simple because of the dogs. I love the idea of the two, yeah two, dogs. But both the adult one as the puppy one in her backpack (so cute!) look, I don’t know, fake? Plastic like? Compared to the realism in the females, these aren’t life-like enough… Which is a darn shame because I love the concept… Here’s hoping they’ll improve the two dogs since I love the girl herself.
I just love the details on her outfit; the stitchery on her sleeves and all those buttons. I love old military looking jackets and this dress fits right up in that alley!

After re-watching the movie several times, I finally picked up the name of the movie he said was a reference for Derby: The Warriors. Go go lots of background noise!

Derby comes fully locked-and-loaded! I can spot several weapons, not including the MP40 (?) she’s holding. Let’s play a little game shall we? Can you spot all the weapons?
The mass amount of weapons aside, she has quite a lot of amazing little details. I just love the stitching on her elbow pads, those carabiner, all those trappings and that riot shield. Everything looks amazing! But I don’t think she’ll have much use for that riot shield in combination with those skates…

As with Fire Ball, Greg (the promotion guy in the movie) also made a mistake regarding Whisper’s reference. Whisper was influenced by Thunderball, not Dr. No.

As far as the amount of details go, Whisper easily blows away the previous girls which might also explain why she’s loved by more and why there are more pictures taken of her. There’s not a single thing that I don’t like about this statue! I love her octopussy tattoos, her translucent wetsuit, the details in her diving equipment, the ankle charm and the detail on the sole of her foot. It’s also kind of neat that they included the flippers even though she isn’t wearing them. I just hope they’ll be separate so you can choose whether or not to display her with them.

While all of the girls are amazing, there always are personal favorites and Whisper is ours. Yes, both Ingis as myself count this one as the best of the five girl. But only if someone pressures us to chose one. 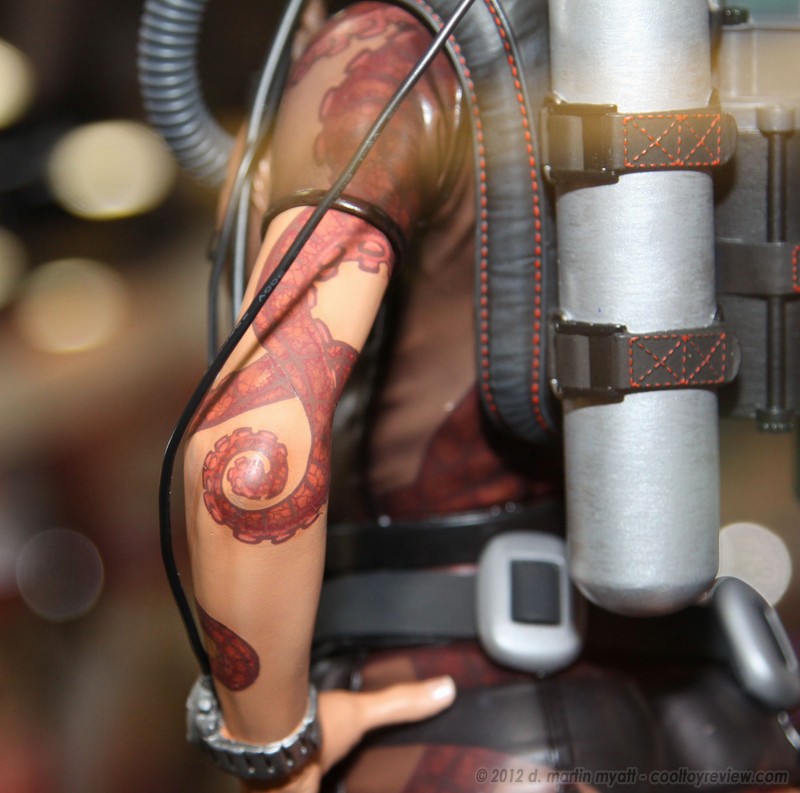 And the last girl they premiered is Lucky. The picked the movie Predator to be a reference for this last, but certainly not least, statue. Why do I say ‘not least’? Simply because this one is also a stunning piece of art and like Whisper, she’s a public favorite. Which I think is explained by the pictures very neatly. While she doesn’t have the amount of details that Whisper has, the ones she has are extremely nicely done! The three things I love the most on this one are the bra, her boots and the ass crack she’s displaying.

I love the fact that they all have those dog tags with charms which are unique to each of the designs. So far, there hasn’t been word if these will be included or not but I certainly hope they will be. Quite some people are saying that these are a rip-off from the Sucker Punch statues but personally I don’t think they are. Okay, they have some similar basic designs like ‘babes with guns’. One person was saying how rip-offily it is that they share the same promotional art (wuut?) and the same bases… Yeah, of course they have the same bases, it’s clean, it works and they’re made by the same company. That aside, I think they also made them like this to compliment the Sucker Punch ones which is nice for the people that have these statues as well. Which also means that these will probably be 1/4th scale, which is neat on one hand but annoying on the other since they’ll take up so many space and we’re short on that as is…

Even though these have nothing to do with our current collection, I really want them simply because they’re so awesome! These will probably be our first Gentle Giant statues. Way to go GG!

You can even watch the movie I referenced to here but beware, there are some errors in it. The Honey Trap stuff goes on until ~3:36. After that, it may be interesting for you but for us it isn’t.

Thanks to all the people who took pictures on SDCC of these amazing statues! Couldn’t have made this review without you! And probably would never have known about these until it was too late…