Gotta catch them all!..?

Edit: There was an error in the description of the UbiWorkshop edition… Forgot to remove the copy-paste bit >_< Sorry about that

Well, at least us Europeans are getting a lot of special editions for this game. Apparently, the only special item the US gets is a Steelbook version. Poor you.

To my count, when I’m not including the regular nor steelbook edition (US), you can pre-order up to four different editions! Getting kind of absurd isn’t it? And the worse part? There isn’t one edition that includes all of the items offered! Talk about major bummer…

The Regular Special Edition
This edition is kind of like the regular but special. Wow. You can pre-order this edition for the same price as the normal regular edition but it includes a special inlay and two unlock-able contents. These unlockables are:

As far as I know, this is an European Exclusive.
This edition is absolutely not interesting for those in the States to import if this content has to be downloaded… If it’s included, then it can be interesting but not when you see the other special editions! 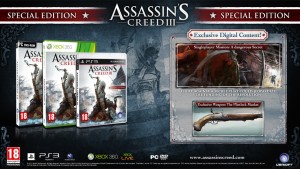 Again not interesting if the content has to be downloaded but it is starting to get more interesting because of the goodies. But wait! We got another edition! Oh, and don’t forget, this is an European exclusive as well. 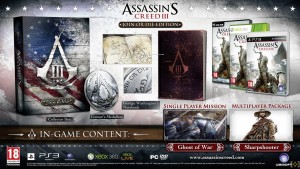 The Freedom Edition
The last European exclusive is the Freedom Edition which we ourselves pre-ordered. Not only the most expensive edition but also the coolest even though I kind of hate Ubisoft because they didn’t include the medallion and the packaging is differently…
What it does include is the following:

This the the most interesting edition that we Europeans are getting (yeah, the last European Exclusive). I just hope that the figurine is nice like those of the previous games. Those were pretty nice for special edition goodies. Now I just need to find that medallion and preferable also that exclusive packaging of the Join or Die edition and I’m all set. 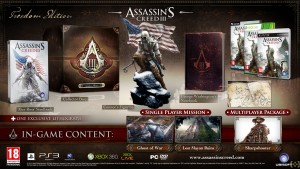 The UbiWorkshop Edition
And last in our list is the UbiWorkshop Edition. This edition is only for sale on the online UbiWorkshop for 99.99$ including shipping to everywhere! This offer is only valid until July 4th which is, for the people who don’t know that, the US Independence Day.
The stuff included in this edition will not be included anywhere else but can be purchased separately but of course, for a higher price. So what’s included? I’ll tell you:

Not that spectacular but perhaps interesting for those unwilling to import nonetheless. Too bad that the graphic novel is softcover… Would have increased the value for me personally if it would have been hardcover. Ah well. 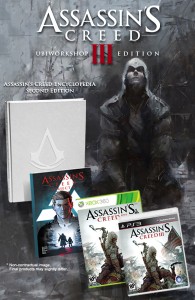 Soooooo, what version are you ordering? And are you planning to contact someone to import one of those pretty European Exclusives? Now I’m hoping for some really nice game merchandise to go with these special editions. Some nice resin statues or a 1/1th scale replica of that amazing looking ax would be nice. Don’t you agree?

Watch here the trailer from the E3. It’s goooooooooood!