Don’t get any funny ideas.

This is going to be a painful year for those that collect game related statues. First the Mass Effect Shepard PF and now this. And just like with the ME one, there are also quite some changes I’d like to see with this one…

I’ve always loved Halo. I know that there are quite a few people that complain about these games but I find that they are fun to play, the music is incredible and the story is good. I’ve also read the first five Halo books (still need to buy the rest) and I absolutely recommend them if you like these kind of Science Fiction stories. So when we caught some sneaks of a Halo licensed product in another Production Peak, we were stocked.

And then he appeared on display on this years SDCC which actually made the reveal kind of unnecessary apart for getting to know the exclusive and the price tag on this bad boy. But it also made perfectly clear that I wouldn’t like the eventual product as much as I had hoped. As you can clearly see they didn’t use any artistic liberties this time. They probably couldn’t on the account of this guy being the über mascot of Microsoft nowadays. Still, I don’t like the fact that they went with the Halo 1 visor. The big orange bubble just looks weird in this scale. It also makes him more of a generic Spartan instead of the iconic Master Chief that we got to know later on. 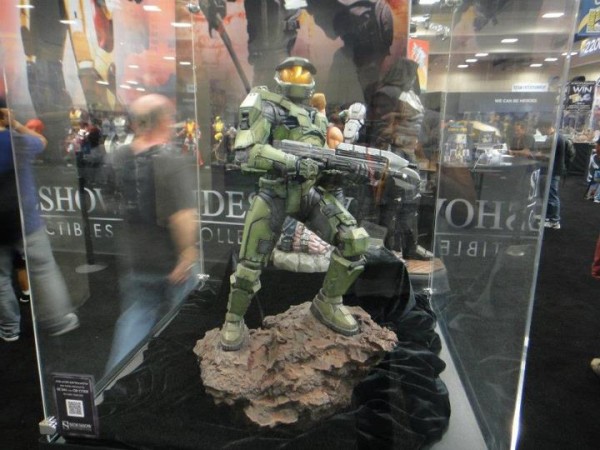 The gun he’s holding here (Assault Rifle) isn’t the only one you’re getting with both the regular edition and the exclusive edition. You’ll also be getting a Magnum and, with the exclusive edition, a Needler! I especially like the Needler although I personally think that they got the color scheme wrong. The Needler is my favorite weapon (together with the Sentinel Beam) so I don’t like it that they made it dirty-salmon-brown instead of blue-ish purple…
I included a fix-up at the end of the gallery below. Tell me if you agree that the changes I made are for the best.

Now the last thing we needed to know (not counting the edition size since that will be a long time before we get to know that one), is the price tag. As you’ll probably guessed, he won’t come cheap what with all those price increases lately. No, with it’s 400 bucks price tag (or 399.99USD to be precise) it’s quite a expensive statue. Yes, it really feels like 400USD is the new standard and not an exception like it used to be with Colossus. It’s makes me sad…