It’s been an awful while ago since I reviewed the last special edition of a game so it’s about time for another.

And what edition is more suitable then this one? Oh, and I’m also trowing in the special edition guide of the game as well!

One of Ingis’ personal favorite PC games has to have been Diablo 2. Apparently, I didn’t knew him then yet, he played that game for hours, days, months. Eventually he stopped playing it since someone from inside the guilt back-stabbed him by emptying up his account… Bastard!
I have to confess that I’ve never played Diablo in my life. Watched people play it but never myself. I’m not an avid PC gamer myself. Prefer controllers. But, I’ve always promised my sweetie that I’d play alongside him should they ever, finally, release the next installment of his favorite game of all times.

And finally, after years of waiting, Blizzard came through. And how!

As you know, we don’t review games here. Good thing that, because thanks to our busy schedules lately, we haven’t been able to play yet. But we do review special editions of games here so that’s what I’m going to do! Because I haven’t played the game yet, I don’t know whether or not this review contains any spoilers. If so, please cover your eyes and scroll down a bit. Thank you. 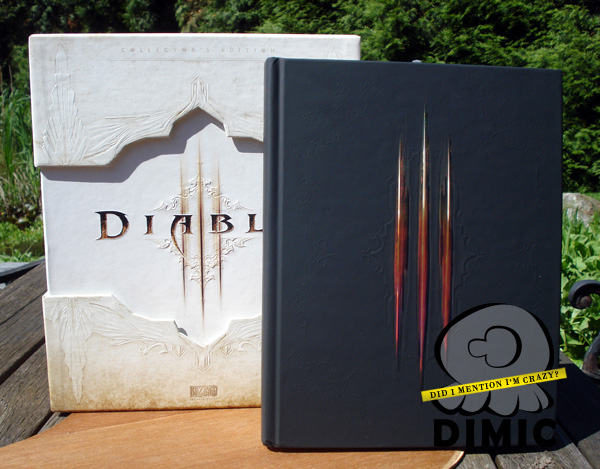 We first pre-ordered this edition at Amazon but when it got available in a local game shop, and it became apparent that it would save us quite a few bucks (around 60USD), we placed our order here. And boy, am I glad we did… This edition rapidly became one sought after edition. It’s already fetching prices above retail. Which is explained by the simple fact that these are indeed limited. So limited in fact that thousands of pre-orders got cancelled even a week before launch. There simply weren’t enough of them and a lot of online stores had to contact their customers.
But if you’re a fan of the Diablo games or just generally like special editions and you don’t have this one yet, shame on you! It truly is a collector’s edition worthy of it’s name. And let me tell you why.

Let’s start with the box. It’s simply amazing! The amount of details, the finishing, the relief, I just love it! It’s certainly on of the most pretty game boxes I have yet seen so far. And sturdy too. It’s made of decent carton and not the flimsy stuff they usually use. When you take the top off, like you can see on the 7th picture, you’ll see that they took the level of detail beyond the outer box as the inside is as pretty as the outside. If familiar with this series of games, you’ll instantly recognize the demon depicted on the inner box.

When viewing the contents you can also see that while it’s a big box, they didn’t leave much unused space. It’s filled to the brim with goodies! Just the way we like it.

Not only do you get two World of Warcraft and two Diablo 3 guest passes which can be interesting if you want to get your girl gaming as well, you also get the keys for Diablo 2 and the Diablo 2 expansion “Lord of Destruction”. Why only passes, you ask? Just look at the next picture. Yes, the one with that sinister, but very pretty, little box.
When opened, this devilish box reveals a wonderful small replica of the Diablo skull and a 4GB soulstone. The USB also includes full versions of Diablo II and Diablo II: Lord of Destruction so that’s why they included the keys. Go figures.

The next item is the soundtrack that I just now ripped and am listening to while writing this review. On the pictures it’s still sealed because I took them when the sun was still shining. While Ingis doesn’t like to listen to it just like that, I do. I find the soundtrack rather relaxing to listen to. I actually really like it. The disc contains 23 songs which is good for (and I counted)  1 hour, 17 minutes and 75 seconds. Which is kind of impressive for an included soundtrack. They usually aren’t long, include but a selection of the music and usually not the best as well. I don’t know if these are but a selection but I’m suspecting it is. But so far, there hasn’t been a soundtrack released nor do I find a complete track-list so it’s purely guesswork.

Another thing that surprised me was the Behind of the Scene’s stuff. It’s not just a DVD! It’s actually a DVD/Bluray combo. And the contents are very interesting as well. It includes movies (cinematics) that are pretty much giant spoilers. Behind the scene and background information which are very interesting to watch and know. Also with giant spoilers. Luckily, I don’t really care since I still am curious to find out how, what and when. But if you don’t like spoilers, avoid this DVD (or Bluray). As with the soundtrack, this one is also pretty lengthy. There are a lot of things to watch and unlike others I’ve viewed, it doesn’t really get boring. For me at least.
What’s also very good to know is that it comes with subtitles! Always handy. It also comes with some extra’s like storyboards, trailers , classes and a retrospective. Me like! I just love history tales.

And lastly, they include an art book as every game should have. Not a tiny one they usually include but a true art book that they usually reserve to sell afterwards. It’s filled to the brim with concept art, ingame objects and cinematic screens. Just how I like it. It’s even almost as thick as the guide which is also a huge plus for me. It contains 208 pages of early concepts to rendered 3D images. So pretty…

Another edition to add to my ever expanding list of favorite special editions (see my profile)! This is a very beautiful edition with a lot of extra’s and well worth to own. Especially for the price it was retailed, you definitely got your money’s worth. There is not a thing I don’t love about this edition but if I had to complain about something it would be the game case. It’s just too plain… Everything else in this edition is wonderful and super detailed but the game case is just the simple black DVD case with front cover that you get with the regular edition.

Item reviewed: Diablo 3
Type: game, PC
Variations: Normal edition (just the game)
Rarity: Not that rare but it is insanely expensive. Of course, it’s worth it, but I’m glad we pre-ordered this one on time…

Not being only a very heavy and big book, it’s also a very nice one. The cover is pretty with the three shiny stripes and the embossed designs but personally, I like the cover from the collector’s editions artbook more. Not that I’m saying this isn’t nice as well, just personal preference. What is very frustrating is the fact that the cover is extremely sensitive to fingerprints and smudges. And I do mean, extremely. You only have to point to it to cause a smudge to appear. Kind of annoying.

Next to a, normally, complete walk-through, this guide also offers some other things like a timeline of Diablo and an art section. Since I haven’t played the game yet, I can’t comment on how accurate the guide itself is but it looks to be more a collector’s item then an actual walkthrough. Don’t get me wrong, it contains a lot of information that can be helpful during game play but it’s not for those that want a step-by-step guide on how to beat enemies nor does it hold you hand during the campaign. Which for me personally is just fine since I seldom use guides for that. Just for items and such usually.

The two things that really makes this guide more interesting then the softcover one are the art section and the included bookmark. They really chose wisely on which art to include since it fits in nicely with the purpose of the guide. The art they included are the designs of the armors from the game. So for each class, and each gender, you get some art and some in game renders. Which is pretty cool since it isn’t that widely included in the artbook of the game. So, you’ll have more art this way. Yay!
Like I said, they also included a metal, bronze like, bookmark which is actually extremely pretty. It’s about 8cm long and 2cm wide. And it’s shiny. And heavy. I like!

Even though I don’t really like the front of this guide, personally I think the cover of the artbook of the collector’s edition is much nicer, I do love the back. I do however love the embossed stuff that’s going on on there. What I also really love is the metal bookmark. It doesn’t happen often that they include something extra with a guide and it’s nicely made as well which is also a big plus. Also the fact that they just concentrated on one thing in the art section of the guide and used art that isn’t that much represented in the artbook of the collector’s edition is a huge plus.

Item reviewed: Diablo 3 Limited Edition Strategy Guide
Type: game, PC
Variations: Softcover guide without the art section and without the bookmark
Rarity: Sold out almost everywhere but not really rare. Nor that expensive.