You don’t have one of those, do you?

This is one of those I didn’t like in the beginning. But after reading more about the character and staring at it for some time, I realized that I wanted this one. I really wanted it.

I like Captain America. Well, I like both Steve Rogers and James Barnes who are the most known persons to have don the stripes-et-star suit. I just love my Black Panther and Captain America comics which are precisely the reason I bought the Black Panther PF exclusive before. And it’s the same reason why I couldn’t stop looking at that James ‘Bucky’ Barnes Captain America statue.

A bit of history…
After losing his father at a young age during World War II, James Buchanan Barnes was adopted as the mascot for Camp Lehigh and nicknamed ‘Bucky’. Because of his skills Bucky was sent to England on his sixteenth birthday where he went through two months of combat training with the British S.A.S. and, after that, another month of special training back in the United States. To his superiors, Bucky was the best natural fighter they’d ever seen and it didn’t take them long before he was made Captain America’s partner.

In the closing days of World War II, during a mission overseas to take down Baron Heinrich Zemo, Cap and Bucky hopped on a plane carrying a bomb and hoping to disarm it. Cap couldn’t reach it but Bucky hung on. It was booby trapped and the bomb detonated. Bucky found himself too close to the explosion which sent him and Captain America falling into the waters below.

While Captain America’s body was frozen in a state of suspended animation for years, Bucky’s body was never found… Or was it? Dum dum dummm…

After the murder of Steve Rogers (you know, Captain America), Cap’s former partner during World War II, James ‘Bucky’ Barnes, agreed to don the mantle. And even as he struggles with the sins he committed as the Winter Soldier – the Soviet mercenary he was brainwashed into becoming during the Cold War – the new Captain America finds his past as both Bucky and the Winter Soldier colliding with his present.

Isn’t that a neat story… Anyhow, on to the statue!

Doesn’t he shine just beautifully? I really love that metallic blue finish on his uniform. It’s pretty. As is his shield. Albeit it’s not perfectly round, it’s really pretty. And shiny. What I also really like is the fabric they used for his suit. It’s about the same spandex-y stuff they used for the Black Cat Premium Format. It looks really good and it accentuates his nice buttocks as well which makes me a very, very happy girl.
The base is also nicely detailed and it really stands out. Love the eagle head. It’s a nice wink to the typical gargoyle that decorates rooftops and the bald eagle which is since 1782 the symbol for the USA. Captain America, bald eagle symbol USA. Nice one isn’t it. Totally unexpected as well.

The exclusive edition gets some really nice extras, being a very nice art print and a switchable portrait. Normally, I don’t really like their unmasked portraits but this one, I like. It isn’t the best I’ve seen but it’s still very nicely done. And I’m glad he doesn’t resemble the face of the art print. That face looks old. And also it’s resembles Steve more than Bucky. At least, to me.

Common known issues with this statue are a crooked eagle head, scratches on the blue metallic finish and a ‘dimple’ on his cute little behind. Luckily, we didn’t have any of this problems. The eagle is a little bit tilted to the left but nothing major and the paint application is almost flawless. The only problem we had with this statue was not with the statue itself but with the box (and a little bit with the base). Our box is a bit damaged (not during transit, must have happened in the factory) and a piece of the felt from the base has come loose. Contacted Sideshow and got a partial refund. Not extremely happy, prefer an undamaged box/base, but the statue itself is almost perfect so; I’m good.

Conclusion:
This is the third premium format statue of Sideshow portraying the Star-Spangled Avenger. The first is long sold out and considered a grail piece (typical meaning: low availability, high price). This was the second and the third (from the movie Captain America: First Avenger) is soon to be released.
That said, I personally like this one the most. The quality is better and the sculpt is nicer than the original Cap and I really don’t like Cap’s uniform from the movie. So, if you’re a fan of Captain America, I strongly suggest to get this piece. I jumped on the waitlist which converted and I haven’t regretted it since. 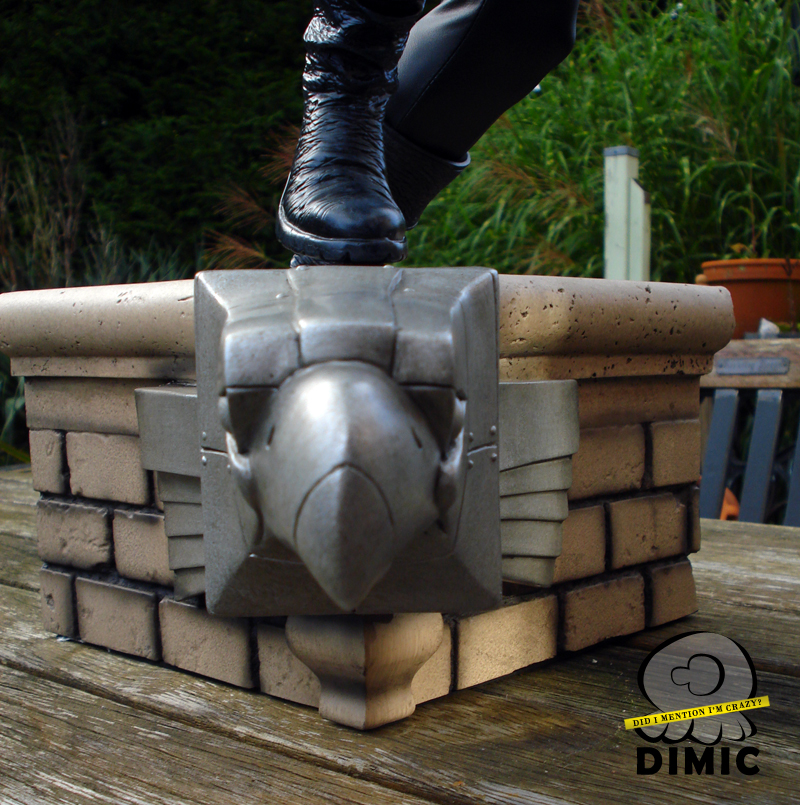 Item reviewed: James ‘Bucky’ Barnes – Captain America Ex
Type: mixed media (resin with cloth)
Manufacturer: Sideshow Collectibles
Variations: regular edition (without the switchable portrait and without the art print)
Rarity: Regular still in stock on the SSC website. Don’t know about waitlist conversions for the ex since it’s been released for a while now. 550 (ex) and 1000 (reg) made worldwide