Another cool UK exclusive: the Street Fighter 2 Turbo tin box set from Capcom. Besides the fact that this one is only released in the UK it’s also extremely rare too find this one complete. So what’s included?

A pretty tin box
On the box you find the title of the game which is pretty neat since this way you can remember what’s inside this rather large box (23 x 15 x 5cm). On the back of the lid you’ll find a cool, and rather flashy, sticker that states it’s an official Nintendo product (it holds the Nintendo logo), that it’s an official Street Fighter 2 Turbo Limited Edition and, and this is soooo cool, the number of your edition. Mine is 9647 but I can’t seem to find any information on how many there are made so I don’t know if it’s a high or low number. Then, on the back of the box itself you’ll find another cool sticker saying Made in Hong Kong, but hey, isn’t everything?
It’s hard to find a tin box that isn’t badly damaged these days… I guess because it’s pretty old now and people don’t always take enough care of specials back than (although, I sometimes see horrifying times happening even in these times)

Oehhh, the game
And, the game manual, which is missing from my edition 🙁 … They’re exactly the same as an ordinary edition so that’s kinda lame… But let me get to the last, and best, part…

A cool pin
Yes, there’s a pin included! And it’s a cool looking pin to boot! Well, not really, but still, there’s a pin. The pin looks like the Street Fighter II Turbo logo (well, it looks like it because it is, but hush), is made out of some sort of metal and measures about 4cm. This is the coolest item of this edition and sadly also the item that’s mostly gone when people sell it. So beware if they state that the edition is complete! Always look at the photo and see if you can spot the pin. 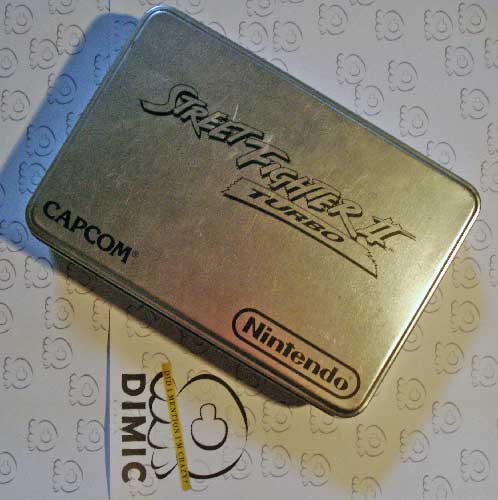 Item reviewed: Street Fighter 2 Turbo Limited Edition
Type: game, Super Nintendo
Variations: next to this one I only know of the normal edition
Rarity: rare, hard to find with pin and without dents/scratches on the tin.