I am a leaf on the wind. Watch how I soar!

One of my all-time favorite tv shows has to be Firefly! It was such a great series and we fans still mourn the fact of FOX their sudden but envitable betrayal. They just sabotaged the series! In the end, only 12 of the, originally made, 14 episodes were aired. When Firefly gained so much fan support over time, they decided to make a film called Serenity (the ship’s name in Firefly). But that was a long, long time ago. But Firefly, Serenity and it’s crew aren’t forgotten and people continue to release all kinds of stuff related to this great series. Especially Quantum Mechanix!

Quantum Mechanix has already released quite a bit stuff in honor of this series. They’ve released statues (maquettes), posters, lithographs and more. But about two years ago, I think, they released something I really really want… 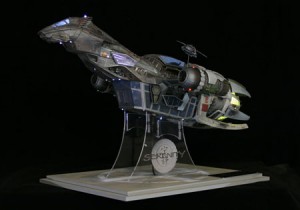 Isn’t she a beaut?

There will be only 1.000 made of this beautiful ship. Then why bother posting this since there are so few made and it’s been such a long time ago that this was released? Surely they must have been sold out already? They’re not. And let me tell you why… Or better yet, let Quantum Mechanix tell you why:

More than three years in the making, Serenity – The Big Damn Replica, has been painstakingly crafted to be absolutely screen-accurate in every aspect. Unlike most ships from science fiction, Serenity was designed from the ground up to be as realistic as possible, from her floor plan to her construction, using real-world components and manufacturing processes. As one of her creators observed, the idea was to make Serenity so real, fans could see themselves walking her decks. With such a sense of place and familiarity, viewers would never feel lost in this Firefly-class transport.

When it came time to develop this replica, we could do no less. Every bolt, every seam and every asymmetrical plate has been recreated with exacting attention to detail in this first and only screen-accurate replica of Serenity. Years of intense effort have gone into all aspects of this model, from the model sculpture built from the movie special-effects master files to the paint job created to match not just the colors of the ship, but the materials as well.

Some of the features of Serenity – The Big Damn Replica:

Oh, just look at that cute little crew! So cute.
So, any guess at the price tag for this thing? The price for this baby is nothing less than $2.495,- (~1.850,- euro). Still, even with this hefty price tag, I still want one! It’s so beautiful… Anyone care to go on a train heist with me? 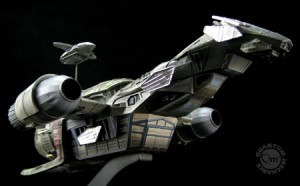 Anyhow, since I don’t see it happening (both robbing a train or earning enough cash to buy it), I was somewhat thrilled to hear that they are going to release a ‘budget’ version too! It’s called the Serenity Little Damn Heroes Maquette.

One of science fiction’s most beloved spaceships isn’t a gargantuan battlecruiser or a sleek starship cruising the galaxies. It’s the workhorse Firefly-class transport, well past her prime with hardly a peashooter to defend herself, named Serenity.
QMx has recreated Serenity in 1:400 scale – about 8 inches long – out of dozens of parts, some as small as a millimeter. Her intricate design matches the Firefly TV series version of the ship in every detail: She was created using the show’s actual CG files.
Our Little Damn Heroes™ Serenity Maquette comes with a sleek black stand and is the perfect size for your favorite space. This hand-painted, polystone, screen-accurate creation is priced at $99.95.

That price feels a little bit better but I still don’t know whether to go for the safe option and buy this one or not to eat for a few years… Oh, before I forget, Sideshow Collectibles has the new one for pre-order at their website.