Who didn’t hear this sentence a lot as a child? And I’m not talking about on the schoolyard. I’m talking about all those hours at our grandparents house, playing side to side with my brother on our SNES with a borrowed copy of Mortal Kombat!
And it’s about time that there’s going to be some decent collectibles from this game. And who’s better in doing that than Pop Culture Shock?

I knew for a longer time that Jerry (owner of PCS) owned the license for Mortal Kombat but I wasn’t that trilled. Not yet at least. That’s because I mainly collect only one line from PCS, namely the Darkstalkers mixed media statues (I’ll post the review for one of them real soon). But when I saw this sneak peek, I was amazed. Even though it isn’t mixed media, we’ll probably going to buy it! I mean, just look at that base! And that pose looks like a killer to. Oh, and for the people that aren’t that into Mortal Kombat or just don’t recognize him, it’s Scorpion. He’s cool 😀

As fans of the series already can see, Scorpion isn’t wearing his original costume. Which I think is a good thing… The old costumes may be iconic but they’re also boring! Just look at that old rag (see introduction image). 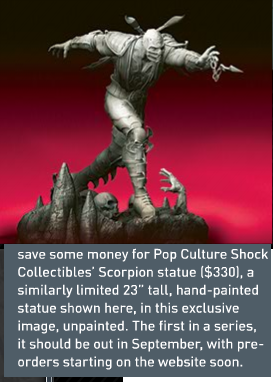 Oh, and another thing. What about all the characters? The first one didn’t really have a lot of options, about six dudes and one dudette. So I think it’s a good thing he’s making them from the new released game. Not that he had a lot of choice mind you. Wait, I’ll quote:

Originally Posted by PopCultureShock
As far as choice of costume, we dont get any say in that. There is a new game out and thats what Warner Bros wants to promote.

They are going to announce him sculpted and all on the San Diego Comic Con so you can expect another preview post then. Oh, and he mentioned something about an exclusive version too. What did he say again? Ah, right:

Originally Posted by PopCultureShock
Not going to spill the beans on the EX yet.

When the time comes, the exclusive will probably be only sold on the SideShow Collectibles website. I think the website is going down then 😀
So how about you? Looking forward already or is it a big pass?