One of the worst Special Editions ever!

First they make a girl very happy when they announced it. It was supposed to include a Hobbes figure (so cute), a batch (5) of tarot cards, a making off disc and some in-game content (like I care about the last one). Instead it get chopped, cropped and mangled due to supply issues… The only things it includes are the last two (next to the game off course). Talk about total disappointment especially since I only noticed it when I went to pickup my copy. My day was quite ruined…

So, what goodies does it include? Like said, only a Making Of disc. And it isn’t even a DVD! It’s a Xbox disc which you can only play on the console itself. Yes, really.
On the disc you find, next to the making of, a video that almost looks like a slide show displaying the Hobbbes figure traveling from place to place and some art. The art is quite stunning and the disc contains quite a lot of it too but nothing can beat a printed art book…

To say that I’m disappointed is an understatement of gross proportions. I still can’t believe that I still bought this game at retail when I was still expecting the original special edition. Ah well, at least the game is still decent. 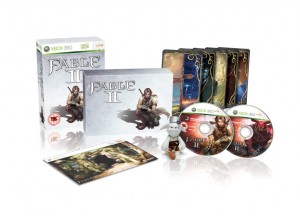 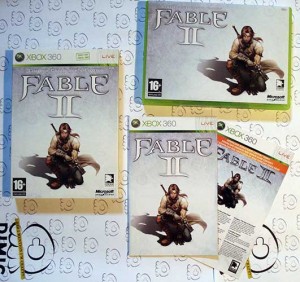 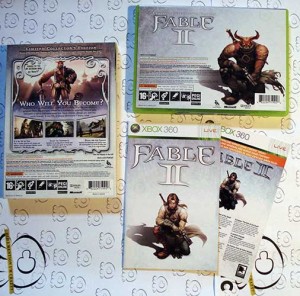 Item reviewed: Fable 2
Type: game, Xbox 360
Variations: the limited edition that was canceled has seen the light after all but only as some sort of press kit
Rarity: Common, you can still find it but you’re better off with the Game of the Year edition