Either you pay me or I flay you alive… with my mind.

I love to play games, like you all know. I’ve played a lot of games and loved a lot of them but most of the time when the game ends, I really don’t think about it anymore. But there are some games I played that will stay forever in my gamers heart. Some franchises you will never forget and really leave a deep impression when the credits are rolling over the screen. There are a few game from the last generation consoles who left that impression on me. Names? Well uh .. Bioshock 1, Gears of War, Alan Wake and, of course, Mass Effect 2. I never did play the first one. I know, shame on me.

Since this is one of my favourite franchises I really would like some statues and/or other merchandise from it. So I was thrilled when Sideshow announced on SDCC ’10 that they bought the license of this game. Why they bought it? I have no idea, ’cause they aren’t doing anything with it. Last year we didn’t hear anything from it, no rumours, no sneaks, no Q&A, nothing. Against all odds I hoped Sideshow was holding all information about this for this year SDCC. Well, the odds were right and again we heard nothing.

But when I was browsing on Facebook, I noticed Kotobukiya posted some digital folder about SDCC. Always curious to learn something new about the wonderful world of merchandise I clicked and holy cow with lot’s-o-stripes; Koto managed to buy a Mass Effect license and already announced two figures.

The first one will be a new figure in the Bishoujo line. Liara T’Soni will be converted to this style and will come out in the second quarter of 2012. This is the second line of game figures that will get a Bishoujo make over, the first one was Tekken. I know the artistic freedom that sculptors are taking with those lines is very big, but nonetheless, I like it. Okay, maybe because they are female and sexy… Hey, sue me.

The second statue will be from the ARTFX department. This department is mostly involved in soft vinyl statues with dynamic poses. They made several Star Wars figures and more game related Halo statues. ARTFX will be responsible to make the first statue of Commander Sheppard on a 1/6th scale and will have multiple weapons at his dispose.

From Liara there is already artwork shown, but from Shepard we only have the conformation that he is coming. Although I really like this news I’ll keep on dreaming of a beautiful PF made by Sideshow from Grunt or Garreth or Thane or … God-damned just make the entire crew already. Maybe that’s why it’s taking so long, maybe … 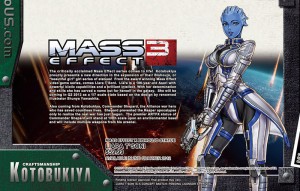