Alone in the Dark

Got my hands on the Alone in the Dark special edition. Well, actually, they threw it to my head… Not a very nice thing to do, is it?

Well, to start of; it’s quite a big box, it measures about 27×21 cm.
The outside looks quite good, though it’s really just a cardboard box. On the sides are the items mentioned that are in the box and the game specs, the back just contains a picture of what’s included. Nothing special really…
On opening the box I notice that there is another cardboard with a really nice picture of the protagonist.

On the right of the box there is the figure and I must say… he’s ugly as hell! The paint job is a mess, his face looks nothing like it, there’s some weird smudge on his shirt that (I suppose) must be blood, and the overall pose doesn’t really appeal. It’s a figure that, although numbered, stays in his box.

On to the next item: the soundtrack, contained in a standard jewel case. This one can, luckily, be ripped to my PC so it quickly disappears back in the box. Although a very nice soundtrack, I can’t really place it with this game. Anyhow, the CD contains only 8 tracks (the official soundtrack contains 21) but is wonderful composed and preformed! A delight to listen to in mine opinion, even worth buying the OST.
Songs contained:
1. Prelude to an end (1)
2. Edward Carnby (2)
3. Truth (15)
4. Crying New York (10)
5. Why (same title doesn’t seem to appear on the OST)
6. Who am I? (8)
7. Loneliness (11)
8. No more humans (14)

The Making of DVD is contained in an beautiful, but enormous, slipcase. It contains 5 categories but I really got this nagging  feeling there’s supposed to be another two categories since there’s space provided for it in the menu. But they strangely disappeared…

– The making of (no00? yes really)
The making of is sometimes hardly understandable since the music is on a higher volume and used on talking parts (which is quite frustrating) than the speech and it doesn’t include subs… that always really annoys me.
Some parts are really boring but luckily there is a menu so can watch your favorite parts. Yeh.

– Central Park art
A slide show with reference material and concept art based on that material. I used the next button a lot…

– Bonus (on a bonus DVD)
It says that you have to go to the DVD folder and look for the folder Bogus, no wait, Bonus. Did that one and guess what, it includes another folder titled wallpaper. Now I’m really curious, so I look into it… nothing! No, I’m quite serious…

– Art book
This is also included as printed version. Yeah it’s exactly the same only now as a fancy slide show, woohoo.
I’ll discuss the printed version here. For a mini art book, it’s quite large (21x15cm) and, together with the CD, my favorite part of this special edition. The art contained is really nice and they really tried to include a lot of it. You’ve got vehicles, locations, characters, wips and wires (3D models), objects and storyboards. It proudly wears the title Art book.

And last but not least, the game, which is off course the reason I bought this special edition (and because it was priced at a mere 5 or 10euros or so). Also this special edition doesn’t trow in something special for the game case itself, it’s just a standard game box. So, I’ll probably buy the steelbook edition some day to include in this edition.

While this is a nice special edition, I’m glad that I bought it for less than 10euro (but this sentiment has to do more with the game then the edition). It’s a nice box and a beautiful soundtrack. Unfortunately, the figure included is really ugly and they didn’t include the nice steelbook case. But still a nice thing to have. 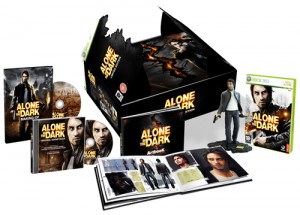 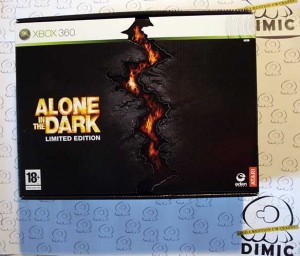 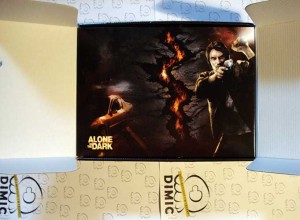 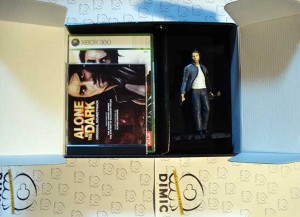 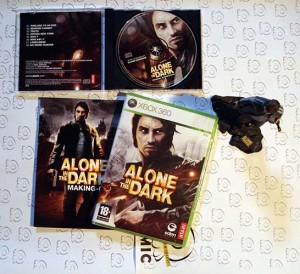 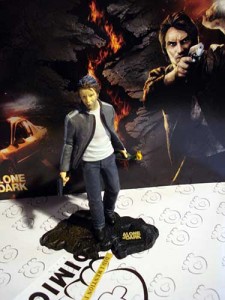 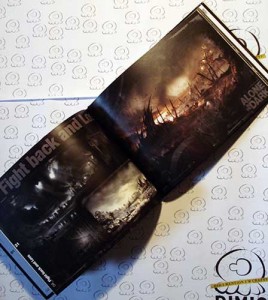 Item reviewed: Alone in the Dark
Type: game, Xbox 360
Variations: Normal edition (same case as included in this edition) and the Steelbook variant
Rarity: Very common, shops trow it at you, even the steelbook edition is rarer